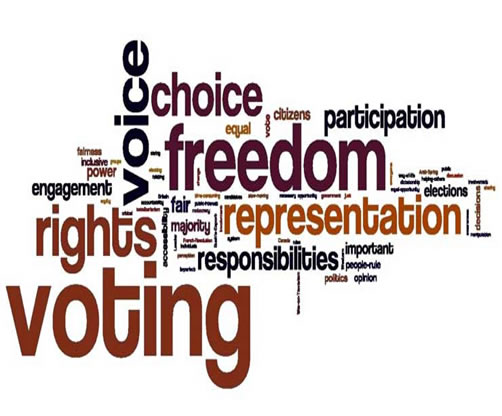 CPPBI ENDORSES THE DECLARATION ON CRITERIA FOR FREE AND FAIR ELECTIONS AS UNANIMOUSLY ADOPTED BY THE INTER-PARLIARMENTARY COUNCIL AT ITS 154TH SESSION (Paris, March 26, 1994), WHICH STATES AS FOLLOWS:

Reaffirming the significance of the Universal Declaration of Human Rights and the International Covenant on Civil and Political Rights which establish that the authority to govern shall be based on the will of the people as expressed in periodic and genuine elections,

Acknowledging and endorsing the fundamental principles relating to periodic free and fair elections that have been recognized by States in universal and regional human rights instruments, including the right of everyone to take part in the government of his or her country directly or indirectly through freely chosen representatives, to vote in such elections by secret ballot, to have an equal opportunity to become a candidate for election, and to put forward his or her political views, individually or in association with others,

Conscious of the fact that each State has the sovereign right, in accordance with the will of its people, freely to choose and develop its own political, social, economic and cultural systems without interference by other States in strict conformity with the United Nations Charter,

Wishing to promote the establishment of democratic, pluralist systems of representative government throughout the world,

Recognizing that the establishment and strengthening of democratic processes and institutions is the common responsibility of governments, the electorate and organized political forces, that periodic and genuine elections are a necessary and indispensable element of sustained efforts to protect the rights and interests of the governed and that, as a matter of practical experience, the right of everyone to take part in the government of his or her country is a crucial factor in the effective enjoyment by all of human rights and fundamental freedoms,

Therefore adopts the following Declaration on Free and fair Elections, and urges Governments and Parliaments throughout the world to be guided by the principles and standards set out therein :

In any State the authority of the government can only derive from the will of the people as expressed in genuine, free and fair elections held at regular intervals on the basis of universal, equal and secret suffrage.

(1) Every adult citizen has the right to vote in elections, on a non-discriminatory basis.

(2) Every adult citizen has the right to access to an effective, impartial and non-discriminatory procedure for the registration of voters.

(3) No eligible citizen shall be denied the right to vote or disqualified from registration as a voter, otherwise than in accordance with objectively verifiable criteria prescribed by law, and provided that such measures are consistent with the State’s obligations under international law.

(4) Every individual who is denied the right to vote or to be registered as a voter shall be entitled to appeal to a jurisdiction competent to review such decisions and to correct errors promptly and effectively.

(5) Every voter has the right to equal and effective access to a polling station in order to exercise his or her right to vote.

(6) Every voter is entitled to exercise his or her right equally with others and to have his or her vote accorded equivalent weight to that of others.

(7) The right to vote in secret is absolute and shall not be restricted in any manner whatsoever.

(1) Everyone has the right to take part in the government of their country and shall have an equal opportunity to become a candidate for election. The criteria for participation in government shall be determined in accordance with national constitutions and laws and shall not be inconsistent with the State’s international obligations.

(2) Everyone has the right to join, or together with others to establish, a political party or organization for the purpose of competing in an election.

(3) Everyone individually and together with others has the right:

To express political opinions without interference;
To seek, receive and impart information and to make an informed choice;
To move freely within the country in order to campaign for election;
To campaign on an equal basis with other political parties, including the party forming the existing government.

(4) Every candidate for election and every political party shall have an equal opportunity of access to the media, particularly the mass communications media, in order to put forward their political views.

(5) The right of candidates to security with respect to their lives and property shall be recognized and protected.

(6) Every individual and every political party has the right to the protection of the law and to a remedy for violation of political and electoral rights.

(7) The above rights may only be subject to such restrictions of an exceptional nature which are in accordance with law and reasonably necessary in a democratic society in the interests of national security or public order (ordre public), the protection of public health or morals or the protection of the rights and freedoms of others and provided they are consistent with States’ obligations under international law. Permissible restrictions on candidature, the creation and activity of political parties and campaign rights shall not be applied so as to violate the principle of non-discrimination on grounds of race, colour, sex, language, religion, political or other opinion, national or social origin, property, birth or other status.

(8) Every individual or political party whose candidature, party or campaign rights are denied or restricted shall be entitled to appeal to a jurisdiction competent to review such decisions and to correct errors promptly and effectively.

(9) Candidature, party and campaign rights carry responsibilities to the community. In particular, no candidate or political party shall engage in violence.

(10) Every candidate and political party competing in an election shall respect the rights and freedoms of others.

(11) Every candidate and political party competing in an election shall accept the outcome of a free and fair election.

4. The Rights and Responsibilities of States

Establish an effective, impartial and non-discriminatory procedure for the registration of voters;
Establish clear criteria for the registration of voters, such as age, citizenship and residence, and ensure that such provisions are applied without distinction of any kind;
Provide for the formation and free functioning of political parties, possibly regulate the funding of political parties and electoral campaigns, ensure the separation of party and State, and establish the conditions for competition in legislative elections on an equitable basis;
Initiate or facilitate national programmes of civic education, to ensure that the population are familiar with election procedures and issues;

(2) In addition, States should take the necessary policy and institutional steps to ensure the progressive achievement and consolidation of democratic goals, including through the establishment of a neutral, impartial or balanced mechanism for the management of elections. In so doing, they should, among other matters:

Ensure that those responsible for the various aspects of the election are trained and act impartially, and that coherent voting procedures are established and made known to the voting public;
Ensure the registration of voters, updating of electoral rolls and balloting procedures, with the assistance of national and international observers as appropriate;
Encourage parties, candidates and the media to accept and adopt a Code of Conduct to govern the election campaign and the polling period;
Ensure the integrity of the ballot through appropriate measures to prevent multiple voting or voting by those not entitled thereto;
Ensure the integrity of the process for counting votes.

(3) States shall respect and ensure the human rights of all individuals within their territory and subject to their jurisdiction. In time of elections, the State and its organs should therefore ensure:

That freedom of movement, assembly, association and expression are respected, particularly in the context of political rallies and meetings;
That parties and candidates are free to communicate their views to the electorate, and that they enjoy equality of access to State and public-service media;
That the necessary steps are taken to guarantee non-partisan coverage in State and public-service media.

(4) In order that elections shall be fair, States should take the necessary measures to ensure that parties and candidates enjoy reasonable opportunities to present their electoral platform.

(5) States should take all necessary and appropriate measures to ensure that the principle of the secret ballot is respected, and that voters are able to cast their ballots freely, without fear or intimidation.

(6) Furthermore, State authorities should ensure that the ballot is conducted so as to avoid fraud or other illegality, that the security and the integrity of the process is maintained, and that ballot counting is undertaken by trained personnel, subject to monitoring and/or impartial verification.

(7) States should take all necessary and appropriate measures to ensure the transparency of the entire electoral process including, for example, through the presence of party agents and duly accredited observers.

Nigerians, say no to electoral violence!

Say no to selling and buying of votes!

Say no to ballot box snatching!

Say no to multiple voting!

Say no to underage voting!

Say no to falsification of election results!

CPPBI supports the fundamental principles relating to periodic free and fair elections as recognized by States in universal and regional human rights instruments.